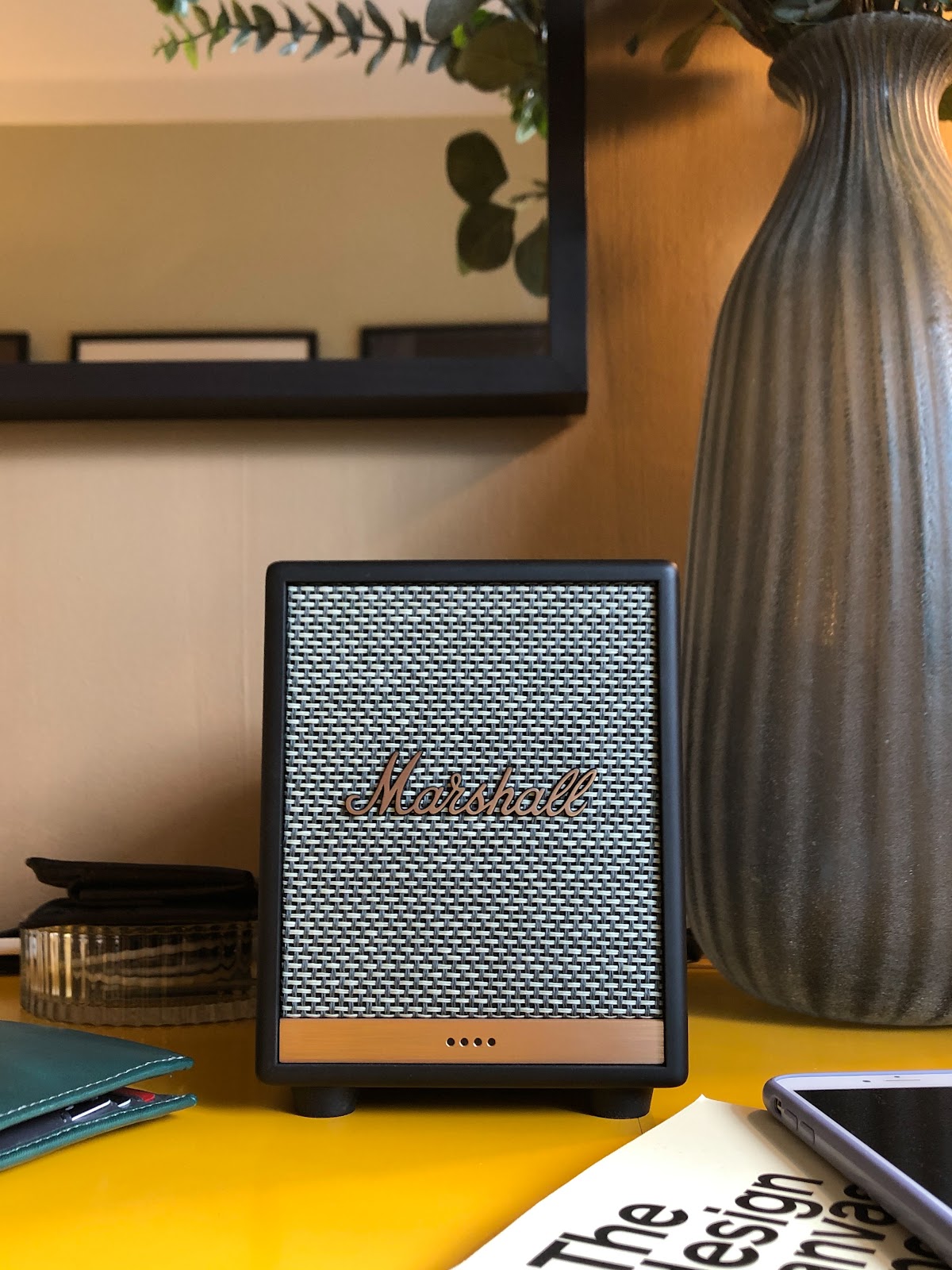 The Uxbridge Voice does quite well in the bass department for a mono speaker this size. It should also be noted that these tests were done with the EQ on the speaker and in the app at flat default levels, but you can, of course, dial up the bass. However, the DSP prevents things from getting too heavy, thus avoiding distortion even when the lows are pumped up via EQ.

On tracks with intense sub-bass content, the Uxbridge Voice delivers solid low-frequency depth. It can sound like it’s on the verge of distortion on this track, but never quite gets there—the DSP keeps the bass clean, but does so by limiting the lows. Interestingly, it’s the opening electronic bass drum hits in a song, not the deeper sub-bass hits, that seem closest to distortion—a hint that the sound signature favors lows and low-mids, and there’s not much in the way of powerful sub-bass being delivered.

Bill Callahan’s “Drover,” a track with far less deep bass in the mix, gives us a better sense of the  general sound signature. The drums on this track sound full and rich, but not thunderous or unnatural, as they can on some bass-forward speakers. Callahan’s voice gets an extra dose of low-mid richness and is the most prominent bass sound in the mix when the EQ is flat. Dialing up the on-speaker bass levels shifts things—the drums get heavier and sound more bass-rich than the vocals. The acoustic guitar strums and higher-register percussive hits have a bright, crisp presence, so there’s plenty of sculpted high-mid and high frequency response as well. Overall the sound signature is heavy on bass and treble, and less so on midrange presence. But tinkering with the in-app EQ can change this a bit.

When it came to the high end I found the Uxbridge did a pretty great job at avoiding harshness in the bells during the intro of “Little Wing” by Jimi Hendrix without sacrificing any of the grittiness from the guitar slides.

Orchestral tracks, like the opening scene from John Adams’ The Gospel According to the Other Mary, sound a bit too bass-heavy in default mode, but you can dial things back in the app to get to a more flat response sound signature.

The Uxbridge voice measures roughly 6.6 by 4.8 by 5.1 inches (HWD) and weighs in at 3.1 pounds. This means it has the height and width comparable to an iPhone XR! As someone who’s always trying to declutter my desk space, this speaker was a welcomed addition to my office setup. It could fit perfectly in the only empty spot on my bookshelf. 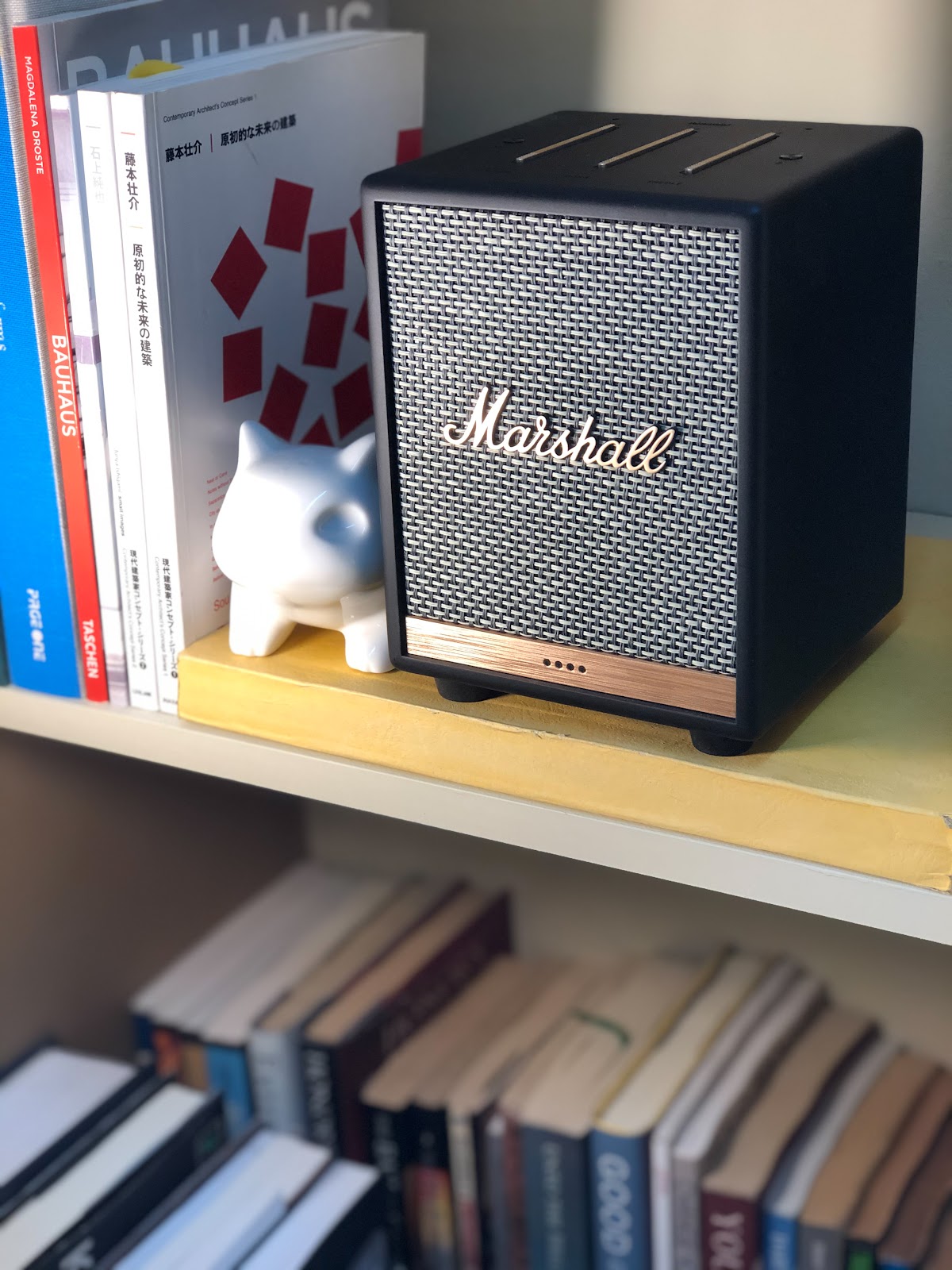 Like most Marshall speakers, the script logo is prominently displayed in the center of the cloth grille, framed by an eggshell-finish black material with golden metallic accents. Staying true to the Marshall vintage look, this is no doubt a statement piece speaker that will be adored by most people. It has even got a couple of compliments when it made its appearance in the background of my zoom meetings.

Fun Fact: The Uxbridge Voice is a nod to the first-ever music store that Jim Marshall and his son, Terry Marshall, founded in 1960 at 76 Uxbridge Road, Hanwell, London.

Despite the retro look, its specs are far from dated. The speaker has four status LEDs at the base of the front face to tell you what listening mode you’re in. The status LEDs light up to show you how much bass or treble level you’re using, so it’s easy to set either to the minimum, mid, or maximum levels (or several levels in between) quickly. So although this is a mono speaker, it does at least give you the chance to dial in your sonic preferences. On the top panel, there are pinhole far-field mics for talking to Google voice assistant and two small buttons for play/pause and mic/mute. In the center of this panel, three unique, long, narrow rocker-style gold buttons control bass, treble, and volume. I personally love the convenience of both voice control and physical buttons. When I’m preoccupied with a task, I can simply ask for updates to my schedule by asking, or choose to pause the song as I pass by my shelf to leave the room.

Marshall’s latest smart speaker, the Uxbridge Voice, is its smallest and least expensive yet in the home speaker series. The audio performance is quite good considering the speaker's size.

The Marshall Voice app (for Android and iOS) will connect to your speaker via your Wi-Fi network, then install firmware updates if there are any. The next step is connecting you to Google Assistant, which requires your Google login. Once this is complete, the Marshall Voice app returns to setup mode.

There are various five-band EQ presets in the Marshall app, and all can be adjusted easily. They can be combined with the on-speaker bass and treble controls to really dial in your preferences. The app mainly exists for three purposes—firmware updates, setting up Google Assistant, and the EQ.

We found Google Assistant voice control to be solid in testing. Our commands were easily understood, even when music was playing loudly. You can control Google Assistant with hands-free voice commands, or by pressing the mic button, and you can disable the mic by muting it—just hold the same button down for a few seconds.

In addition to Google Assistant, the Uxbridge Voice supports AirPlay 2 and Spotify Connect playback, as well as Bluetooth 4.2.

The Marshall Uxbridge Voice delivers a solid listening experience for its size. There’s plenty of bass depth, and its price also reflects the inclusion of hands-free Google Voice control.